In this article we are going to consider our first intraday trading strategy. It will be using a classic trading idea, that of “trading pairs”. In this instance we are going to be making use of two Exchange Traded Funds (ETFs), SPY and IWM, which are traded on the New York Stock Exchange (NYSE) and attempt to represent the US stock market indices, the S&P500 and the Russell 2000, respectively.

The strategy broadly creates a “spread” between the pair of ETFs by longing one and shorting an amount of the other. The ratio of long to short can be defined in many ways such as utilising statistical cointegrating time series techniques. In this scenario we are going to calculate a hedge ratio between SPY and IWM via a rolling linear regression. This will then allow us to create a “spread” between SPY and IWM which is normalised to a z-score. The trading signals will be generated when the z-score exceeds certain thresholds under the belief that the spread will revert to the mean.

The rationale for the strategy is that SPY and IWM are approximately characterising the same situation, that of the economics of a group of large-cap and small-cap US corporations. The premise is that if one takes the spread of the prices then it should be mean-reverting, since while “local” (in time) events may effect either the S&P500 or the Russell 2000 indices separately (such as small-cap/large-cap differences, rebalancing dates or block trades), the long-term price series of the two will likely be cointegrated.

The strategy is carried out in the following steps:

Perhaps the best way to understand the strategy in depth is to actually implement it. The following section describes a full Python code (single file) for implementing this mean-reverting strategy. I have liberally commented the code in order to aid understanding.

As with all of the Python/pandas tutorials it is necessary to have setup a Python research environment as described in this tutorial. Once setup, the first task is to import the necessary Python libraries. For this backtest matplotlib and pandas are required.

The specific library versions that I am using are as follows:

The following function create_pairs_dataframe imports two CSV files containing the intraday bars of two symbols. In our case this will be SPY and IWM. It then creates a separate dataframe pairs, which uses the indexes of both original files. Since their timestamps are likely to be different due to missed trades and errors, this guarantees that we will have matching data. This is one of the main benefits of using a data analyis library like pandas. The “boilerplate” code is handled for us in a very efficient manner.

The next step is to carry out the rolling linear regression between SPY and IWM. In this instance IWM is the predictor (‘x’) and SPY is the response (‘y’). I have set a default lookback window of 100 bars. As discussed above this is a parameter of the strategy. In order for the strategy to be considered robust we ideally want to see a returns profile (or other measure of performance) as a convex function of lookback period. Thus at a later stage in the code we will carry out a sensitivity analysis by varying the lookback period over a range.

Once the rolling beta coefficient is calculated in the linear regression model for SPY-IWM, we add it to the pairs DataFrame and drop the empty rows. This constitutes the first set of bars equal to the size of the lookback as a trimming measure. We then create the spread of the two ETFs as a unit of SPY and −βi units of IWM. Clearly this is not a realistic situation as we are taking fractional amounts of IWM, which is not possible in a real implementation.

Finally, we create the z-score of the spread, which is calculated by subtracting the mean of the spread and normalising by the standard deviation of the spread. Note that there is a rather subtle lookahead bias occuring here. I deliberately left it in the code as I wanted to emphasise how easy it is to make such a mistake in research. The mean and standard deviation are calculated for the entire spread time series. If this is to reflect true historical accuracy then this information would not have been available as it implicitly makes use of future information. Thus we should use a rolling mean and stdev to calculate the z-score.

In order to achieve this situation it is necessary to know, for each bar, whether the strategy is “in” or “out” of the market. long_market and short_market are two variables defined to keep track of the long and short market positions. Unfortunately this is far simpler to code in an iterative manner as opposed to a vectorised approach and thus it is slow to calculate. Despite 1-minute bars requiring ~700,000 data points per CSV file it is still relatively quick to calculate on my older desktop machine!

To iterate over a pandas DataFrame (which admittedly is NOT a common operation) it is necessary to use the iterrows method, which provides a generator over which to iterate:

At this stage we have updated pairs to contain the actual long/short signals, which allows us to determine whether we need to be in the market. Now we need to create a portfolio to keep track of the market value of the positions. The first task is to create a positions column that combines the long and short signals. This will contain a list of elements from (1,0,−1), with 1 representing a long/market position, 0 representing no position (should be exited) and −1 representing a short/market position. The sym1 and sym2 columns represent the market values of SPY and IWM positions at the close of each bar.

Once the ETF market values have been created, we sum them to produce a total market value at the end of every bar. This is then turned into a returns stream by the pct_change method for that Series object. Subsequent lines of code clear up the bad entries (NaN and inf elements) and finally calculate the full equity curve.

The main function brings it all together. The intraday CSV files are located at the datadir path. Make sure to modify the code below to point to your particular directory.

In order to determine how sensitive the strategy is to the lookback period it is necessary to calculate a performance metric for a range of lookbacks. I have chosen the final total percentage return of the portfolio as the performance measure and the lookback range in [50,200] with increments of 10. You can see in the following code that the previous functions are wrapped in a for loop across this range, with other thresholds held fixed. The final task is to use matplotlib to create a line chart of lookbacks vs returns:

The chart of lookback period vs returns can now be seen. Note that there is a “global” maximum around a lookback equal to 110 bars. If we had seen a situation where lookback was independent of returns this would have been cause for concern: 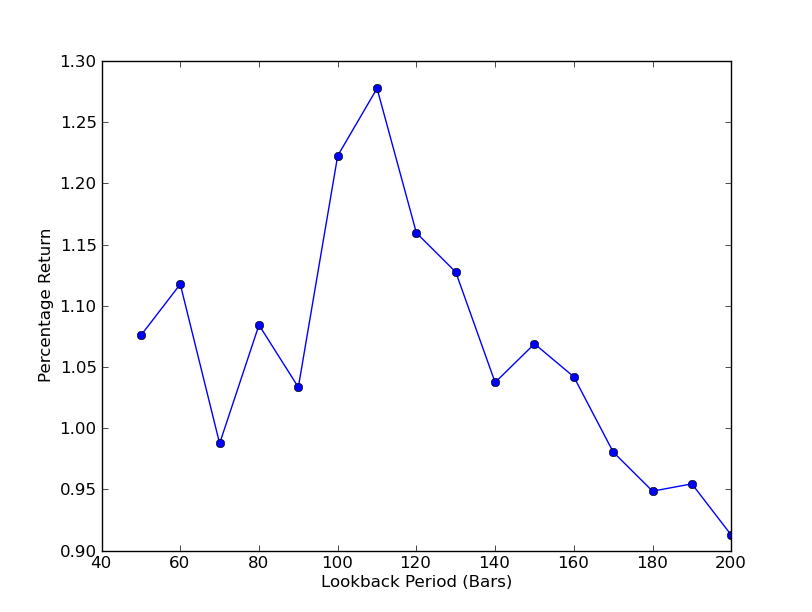 No backtesting article would be complete without an upwardly sloping equity curve! Thus if you wish to plot a curve of the cumulated returns vs time, you can use the following code. It will plot the final portfolio generated from the lookback parameter study. Thus it will be necessary to choose the lookback depending upon which chart you wish to visualise. The chart also plots the returns of SPY in the same period to aid comparison:

The following equity curve chart is for a lookback period of 100 days: 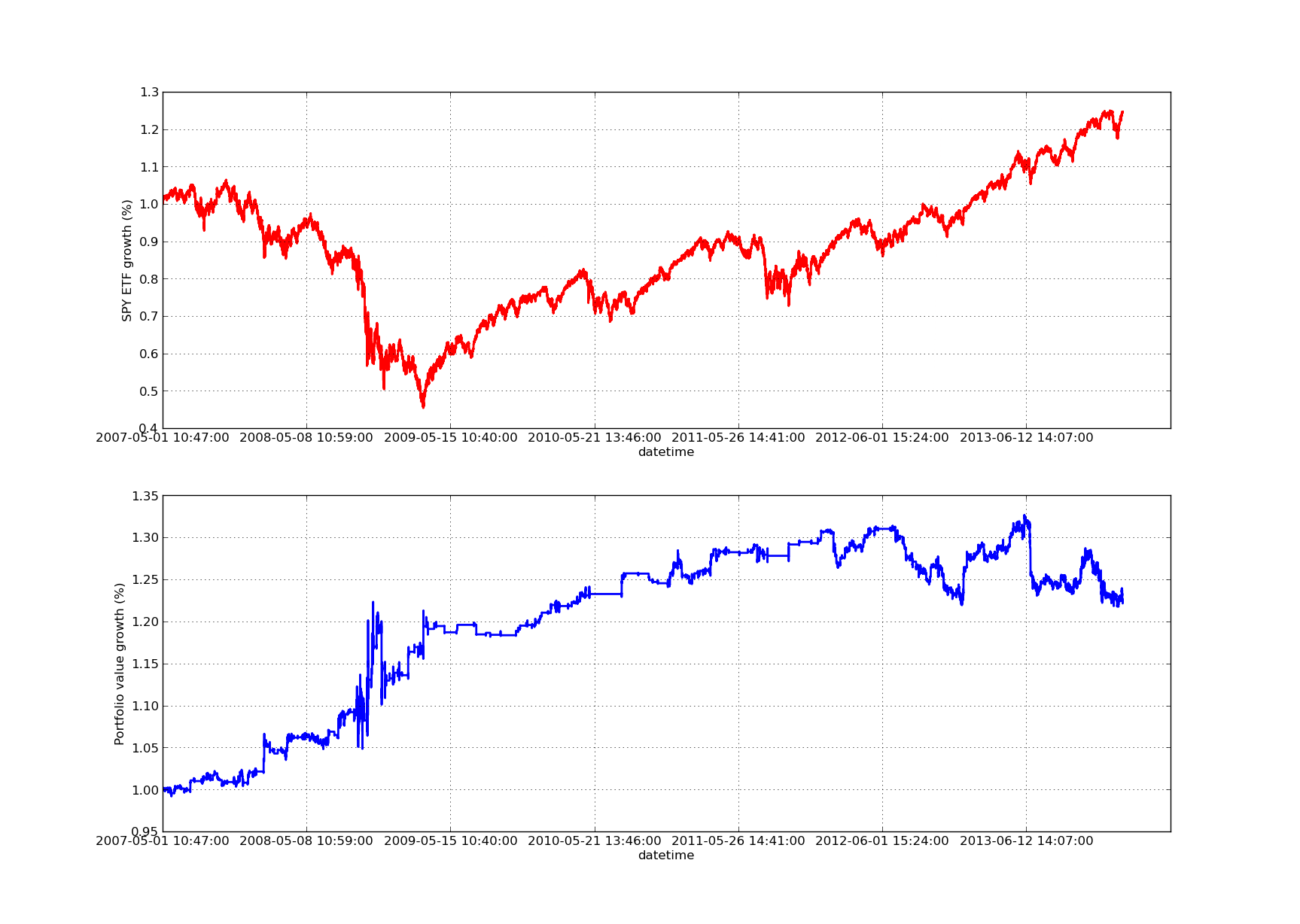 Note that the drawdown of SPY is significant in 2009 during the period of the financial crisis. The strategy also had a volatile period at this stage. Also note that performance has deteriorated somewhat in the last year due to the strongly trending nature of SPY in this period, which reflects the S&P500 index.

Note that we still have to take into account the lookahead bias when calculating the z-score of the spread. Further, all of these calculations have been carried out without transaction costs. This strategy would certainly perform very poorly once these factors are taken into consideration. Fees, bid/ask spread and slippage are all currently unaccounted for. In addition the strategy is trading in fractional units of ETFs, which is also very unrealistic.

In later articles we will create a much more sophisticated event-driven backtester that will take these factors into consideration and give us significantly more confidence in our equity curve and performance metrics.