5.4 Why do we need an off-sample test

Backtesting is not equal to the real-market

Many beginners are easily convinced of their trading strategies and are ready to put their thoughts into practice with a performance report or fund curve that looks good. Admittedly, this backtesting result fits perfectly with the certain state of a market they observed, but once the trading strategy is put into a long-term battle, they will find that the strategy is actually not effective.

I have seen many trading strategies, and the success rate can reach up to 50% when backtesting. Under the premise of such a high winning rate, there is still have a higher ratio of profit and loss of 1:1. However, once these strategies are put into practice, they are all losing money. There are many reasons for this. Among these reasons, the data sample is too small is the major one, which leads to the deviation of the data .

However, the trading is such a tangled thing, and it is very clear afterwards, but if we return to the original, we still feel overwhelmed. This involves the root cause of quantification - the limitations of historical data. so, if we only use limited historical data to test the trading strategy, it is difficult to avoid the problem of “Driving according to looking at the rearview mirror”.

What is an off-sample test?

How to make full use of limited data to scientifically test the trading strategy when data is limited ? The answer is the off-sample test method. During the backtesting, the historical data is divided into two segments according to the time sequence. The previous segment of data is used for strategy optimization, called the training set, and the latter segment of data is used for the off-sample test, called the test set.

If your strategy is always valid, then optimize several sets of best parameters in the training set data, and apply these sets of parameters to the test set data to backtest again. Ideally, the backtest results should be almost the same with the training sets, or the difference is within a reasonable range. Then it can be say that this strategy is relatively effective.

But if a strategy performs well in the training set, but the test set performs poorly, or changes a lot, and when used other parameters are sitll the same, then the strategy may have data migration bias.

If you do not use the off-sample test, just directly use the data from 2009 to 2019 to test the strategy. The result may be a good backtest performance report because of over-fitting the historical data, but such backtest results have little meaning for the real market and have no guiding effect, especially those strategies with more parameters.

As mentioned above, under the premise of lack of historical data, it is a good idea to divide the data into two parts to form data within and off-sample. But if you can take a recursive test and a cross-check test, it might be even better.

The following diagram can explain the principle of the recursive test intuitively: 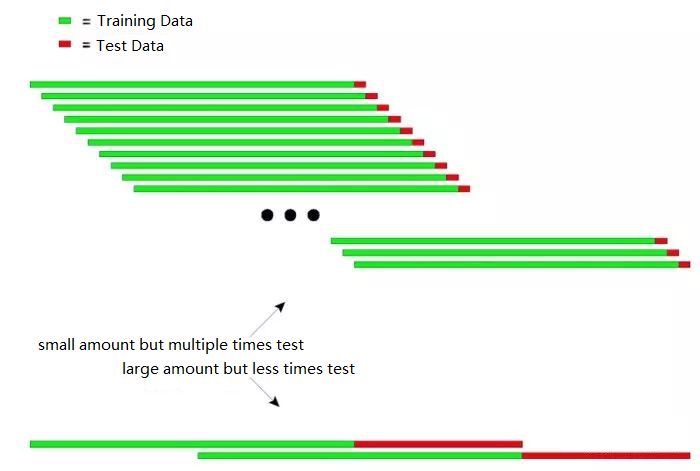 The above figure shows two methods of recursive testing.

In practical applications, multiple tests can be performed by changing the length of the test data to determine the stability of the model in response to non-stationary data.

The basic principle of cross-checking test: divide all the data into N parts, use N-1 parts to train each time, and use the remaining part to test.

From 2000 to 2003, it is divided into four parts according to the annually division. The operation of the cross-check test is as follows:

As shown in the figure above: The biggest advantage of the cross-check test is to make full use of the limited data, and each training data is also the test data. However, there are also obvious shortcomings when cross-checking is applied to the backtest:

In addition, when testing the quantitative strategy model, both the recursive test and the cross-check test have encountered data overlap problems.

When developing a trading strategy model, most of the technical indicators are based on historical data of a certain period. For example, using trend indicators to calculate historical data for the past 50 days, but for the next trading day, which is again calculated from the data for the first 50 days of the trading day, the data for calculating the two indicators is the same for 49 days. This will result in a very insignificant change in the indicator for each adjacent two days. 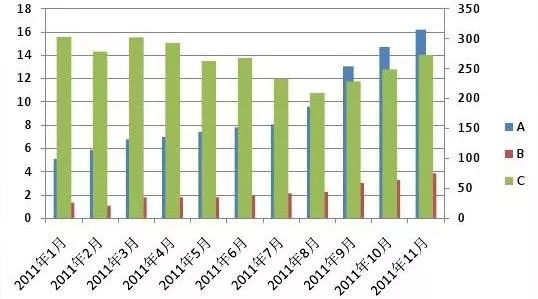 Data overlap can have the following effects:

A good trading strategy should be profitable in the future. off-sample testing, in addition to objectively detecting trading strategies, is more efficient in saving time for quantitative traders. In most cases, it is very dangerous to use the optimal parameters of all the samples directly.

Just like the trading itself, we can never go back time and make a correct decision for ourselves. If you have the ability to time travel, you wouldn’t need to do trading at all. after all, we are all mortals, we must verify our strategy in the historical data.

However, even with the huge history data, in front of the endless and unpredictable future, history is extremely scarce. Therefore, the trading system based on history will eventually sink over time. Because history cannot exhaust the future. Therefore, a complete positive expectation trading system must be supported by its inherent principles and logic.