Speaking of hedging strategies, there are various types, diverse combinations, and diverse ideas in various markets. We explore the design ideas and concepts of the hedging strategy from the most classic intertemporal hedging. Today, the crypto currency market is much more active than at the beginning, and there are also many futures contract exchanges that offer plenty of opportunities for arbitrage hedging. Spot cross-market arbitrage, cash hedge arbitrage, futures intertemporal arbitrage, futures cross-market arbitrage, etc., crypto quantitative trading strategies emerge one after another. Let’s take a look at a “hardcore” intertemporal hedging strategy written in c++ and trading on the OKEX exchange. The strategy is based on the FMZ Quant quantitative trading platform.

Why is the strategy somewhat hardcore because the strategy is written in c++ and the strategy reading is slightly more difficult. But it does not prevent readers from learning the essence of this strategy design and ideas. The strategy logic is relatively simple, the code length is moderate, only 500 lines. In terms of market data acquisition, unlike the other strategies that use the “rest” interface. This strategy uses the “websocket” interface to acept exchange market quotes.

In terms of design, the strategy structure is reasonable, the code coupling degree is very low, and it is convenient to expand or optimize. The logic is clear, and such a design is not only easy to understand. As a teaching material, learning this strategy’s design is also a good example. The principle of this strategy is relatively simple, that is, does the spread of forward contract and recent contract are positive or negative? the basic principle is consistent with the intertemporal hedging of commodity futures.

after understand the basic principles, the rest is how the strategy triggers the opening position of the hedge, how to close the position, how to add positions, total position control method and other strategy details processing.

The hedging strategy is mainly concerned with the fluctuation of the subject price difference (The Spread) and the regression of it. However, the difference is likely to fluctuate slightly, or to oscillate sharply, or in one direction.

This brings uncertainty about hedging profits and losses, but the risk is still much smaller than the unilateral trend. for the various optimizations of the intertemporal strategy, we can choose to start from the position controlling level and the opening and closing trigger condition. for example, we can use the classic “Bollinger band Indicator” to determine the price fluctuation. Due to the reasonable design and low coupling degree, this strategy can be easily modified into the “Bollinger index intertemporal hedging strategy”

Looking at the code throughout, you can conclude that the code is roughly divided into four parts.

Because some functions in the code return a state, these states are defined in the enumeration type State.

This class is mainly responsible for processing the acquired tick data into a difference K line for driving the strategy hedging logic.

Some readers may have questions, why use tick data? Why construct a K-line data generator like this? Is it not good to use K-line data directly? This kind of question has been issued in three bursts. When I wrote some hedging strategies, I also made a fuss. I found the answer when I wrote the “Bollinger hedge strategy”. Since the K-line data for a single contract is the price change statistics for this contract over a certain period of time.

Therefore, we need to use real-time tick data to calculate the difference in real time and calculate the price change in a certain period in real time (that is, the highest, lowest, open and close price on the K-line column). So we need a K-line data generator, as a class, a good separation of processing logic.

Because the code is relatively long, some parts are omitted, this is mainly showing the structure of this hedge class, the constructor Hedge function is omitted, mainly for the purpose the object initialization. Next, we introduce the two main “function” functions.

This function mainly deals with order inspection, order cancellation, position detection, position balancing and so on. Because in the process of hedging transactions, it is impossible to avoid a single leg (that is, a contract is executed, another one is not), if the examination is performed in the placing order logic, and then the processing of the re-send order operation or closing position operation, the strategy logic will be chaotic.

So when designing this part, I took another idea. if the hedging operation is triggered, as long as the order is placed once, regardless of whether there is a single-leg hedging, the default is that the hedging is sucessful, and then the position balance is detected in the getState function, and the logic for processing the balance will be deal with independently.

The trading logic of the strategy is encapsulated in this function, in which getState is called, and the K-line data generator object is used to generate the K-line data of the difference(the spread), and the judgment of opening, closing, and adding position logic is performed. There are also some data update operations for the chart.

One point to note is that the tick market mentioned above is actually the subscription order thin depth data interface, which is the order book data for each file. However, the strategy only uses the first file of data, in fact, it is almost the same as the tick market data. The strategy does not use the data of other files, nor does it use the order value of the first file.

Take a closer look at how the strategy subscribes to the data of the websocket interface and how it is set up.

First, the url encoding of the subscription message json parameter passed by the subscribed interface, that is, the value of the payload parameter. Then an important step is to call the FMZ Quant platform’s API interface function Dial function. The Dial function can be used to acess the exchange’s websocket interface. Here we make some settings, let the websocket connection control object ws to be created have automatic reconnection of disconnection (the subscription message still uses the value qs string of the payload parameter), to achieve this function, you need to add configuration in the parameter string of the Dial function.

The beginning of the Dial function parameter is as follows:

this is the address of the websocket interface that needs to be acessed, and is separated by “|”.

compress=gzip_raw&mode=recv&reconnect=true&payload="+qs are all configuration parameters.

After this setting, even if the websocket connection is disconnected, FMZ Quant trading platform’s underlying system of the docker system will automatically reconnect and get the latest market data in time.

Grab every price fluctuation and quickly capture the right hedge.

Position control is controlled using a ratio of hedge positions similar to the “Fibonaci” series.

It can be seen that the number of additional positions added each time is the sum of the last two positions.

The period of the parameter NPeriod control provides some dynamic control over the opening and closing position of the strategy.

c++ strategy custom chart drawing operation is also very simple. You can see that in the constructor of the hedge class, we use the written chart configuration string _cfgStr to configure the chart object _c, _c is the private component of the hedge class. When the private member is initialized, the chart object constructed by the FMZ Quant platform custom chart API interface function is called.

When the strategy code needs to insert data into the chart, it also calls the member function of the _c object directly, or passes the reference of _c as a parameter, and then calls the object member function (method) of _c to update the chart data and insert operation.

After placing the order, mark the K line chart.

As follows, when drawing a K line, a reference to the chart object _c is passed as a parameter when calling the member function feed of the BarFeeder class.

That is, the formal parameter c of the feed function.

Insert a new K-line Bar data into the chart by calling the add member function of the chart object _c. 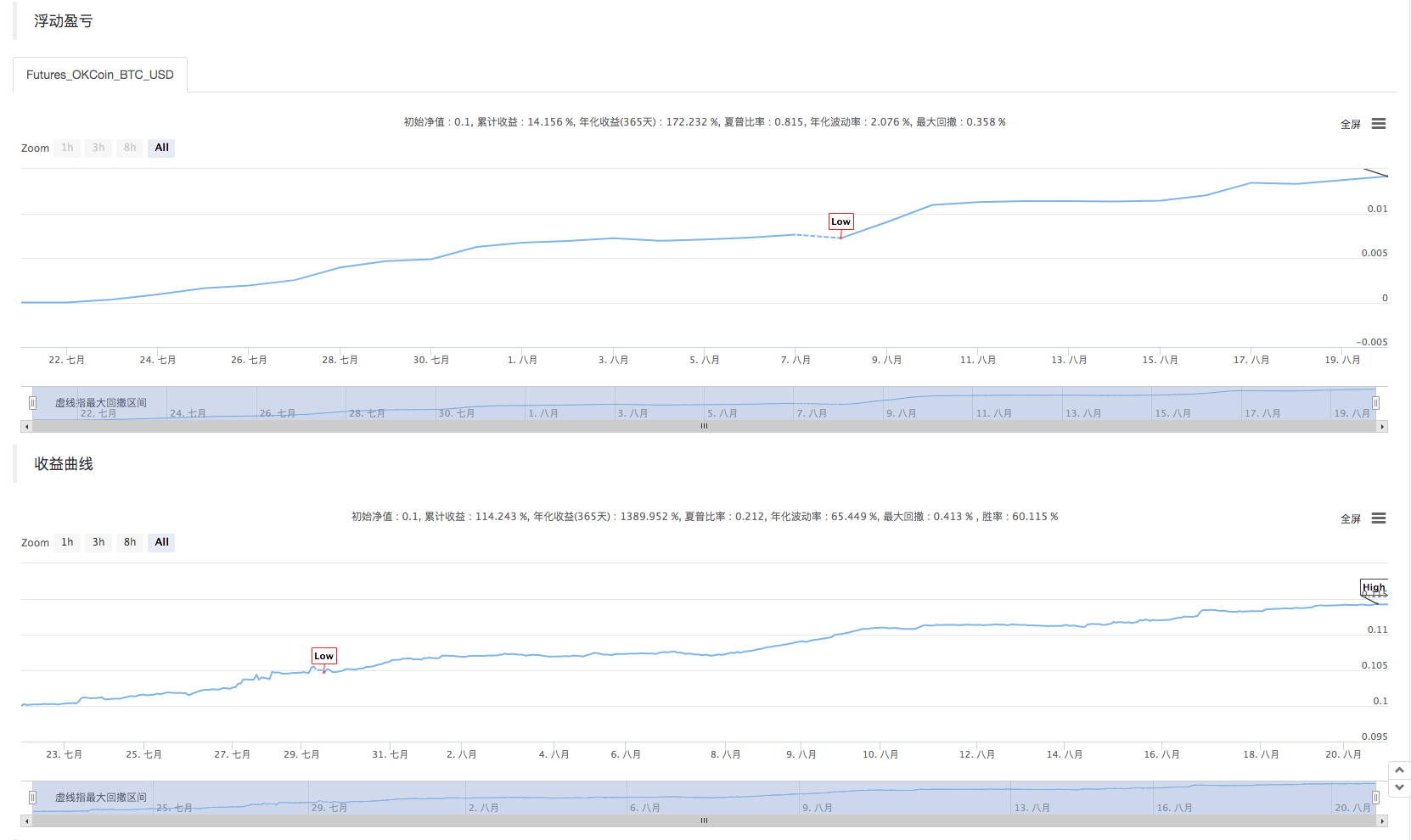 This strategy is only for learning and communication purposes. When apply it in the real market, please modify and optimize acording to the actual situation of the market.

More interesting strategies are in the FMZ Quant platform": https://www.fmz.com