AWS, Google cloud, Digital Ocean or Microsoft Azure, any major cloud computing will be fine, as long as the connection is stable and reliable. so we suggest only using these big brand.

As for the cloud computing configuration, the minimal plan will perfectly done the job. our docker system are very streamlined and effective. the whole docker system is only few MB.

For example, a cloud computer (VPS) with 2 Core CPU, CentOS operation system, 2GB RAM and 25GB hard drive will be enough for the docker to run smoothly. The major cloud computing service provider such as AWS has a monthly payment plan for this configuration, only cost $10 us dollar per month. others such as Google cloud even are free for using one year.

Before buying the VPS service, choose the cloud computer location where is the nearest location to the exchange that you want to trade on. Next, choose the CentOS operation system (Ubuntu, Microsoft or other Redhat operation system all works fine, this article is using CentOS as a demonstrations).

For using your local computer to Log in to the VPS computer. Windows OS recommends the Xshell client, MacOS can just use its own terminal.

Download the FMZ docker, click on https://www.fmz.com/m/add-node to copy the link of the docker that matches your system version. 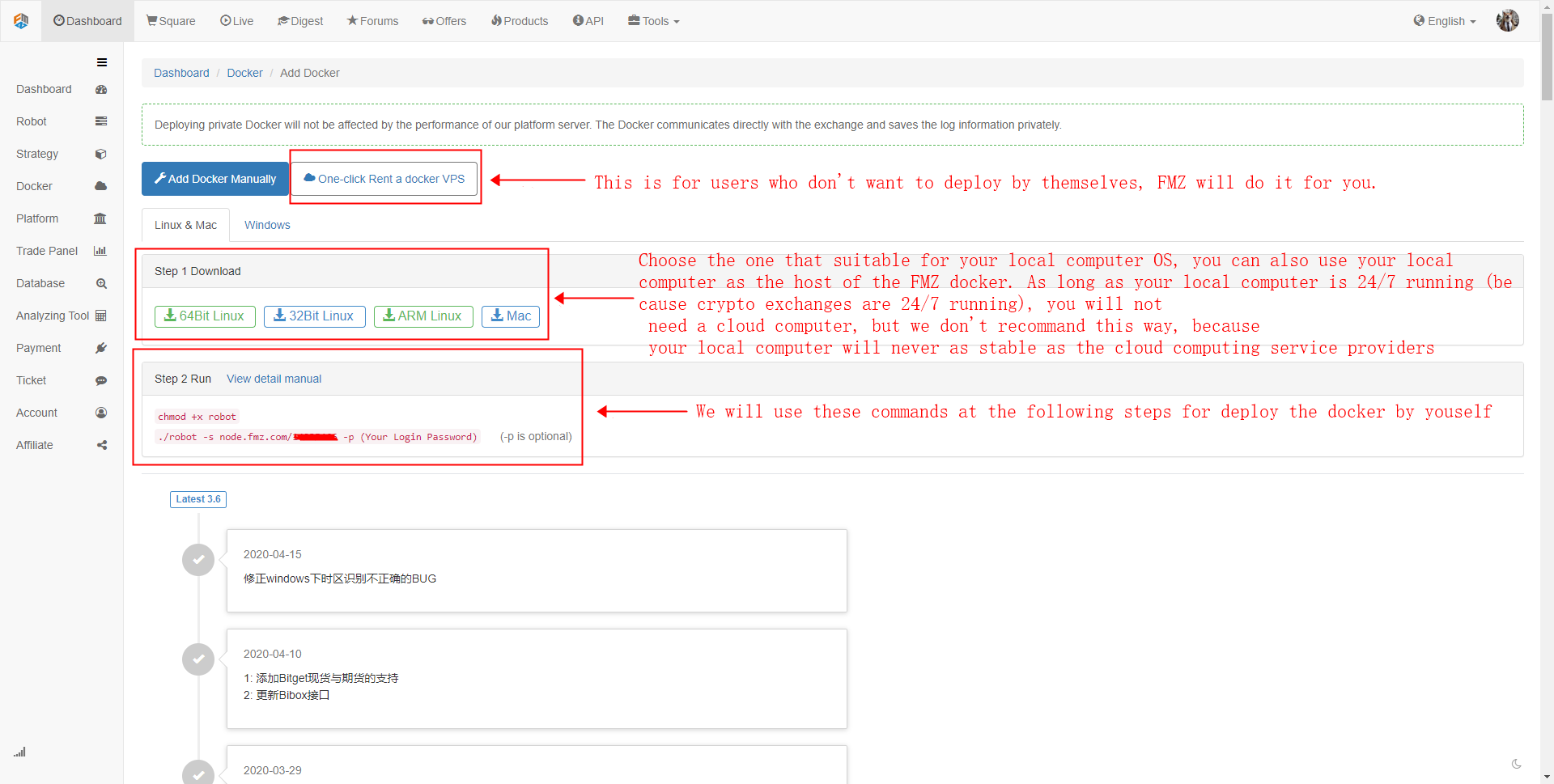 Next, login your VPS server, in this article, we use CentOS as example.

to download the FMZ docker system. If it show that wget doesn’t exist, run yum install wget -y to install wget. other Linux distribution have different commands (Ubuntu uses Apt-get and so on).

to Unzip the file (when typing to the robot word, you can press the TAB key to automatically complete the path)

It means that the FMZ docker is running. if you encounter permission problems, run:

At this time, the FMZ docker runs in the foreground. When closes the SSH connection, it will disconnect. therefore, we need it running on the background, run:

In this way, the FMZ docker will running on the backgroup of your VPS server, you don’t need SSH connection to the server all the time.

Also, on FMZ.COM website, if you delete the docker from the docker page. the VPS server’s docker will also be delete too.

FMZ docker generally do not need to upgrade. If you encounter new exchanges, bug fixes, or the docker version too old situations, you can upgrade according to the following steps:

Log in to the directory where the docker is located (if it has not been changed, it is generally the default directory after SSH login) execute ls command to view the file

The advantage of this way of upgrade is that the logs are retained, and the robots run by the old docker will not stop (already loaded and running in memory). To upgrade the docker of a robot, only need stop the robot, replace the docker in the parameter interface (the latest docker id is the largest) and restart.

If the old docker no longer runs any robots, just delete it directly on the https://www.fmz.com/m/nodes page.