What is the Aroon indicator?

In the technical analysis, Aroon is a very unique technical indicator. The word “Aroon” comes from Sanskrit, meaning “the light of dawn”. It is not as familiar as MA, MACD, and KDJ. It was launched later, and was invented by Tushar Chande in 1995. The author also invented the Chand momentum indicator (CMO). And the intraday momentum index (IMI). If a technical indicator was known by more people and used by more people, then the ability of making profit of this indicator will become less possible, but the relatively new Aroon indicator is exactly the opposite way. From this perspective, the Aroon indicator is actually a good choice.

The Aroon indicator in the chart

The Aroon indicator helps traders predict the relative positional relationship between price movements and trend areas by calculating the number of K-lines between the highest and lowest prices before the current K-line distance. It consists of two parts: AroonUp and AroonDown. The two lines move up and down between 0 and 100. Although they are named up and down, unlike the BOLL indicator, it’s not “the real upper and lower” line. The following picture is the Aroon indicator in the K-line chart: 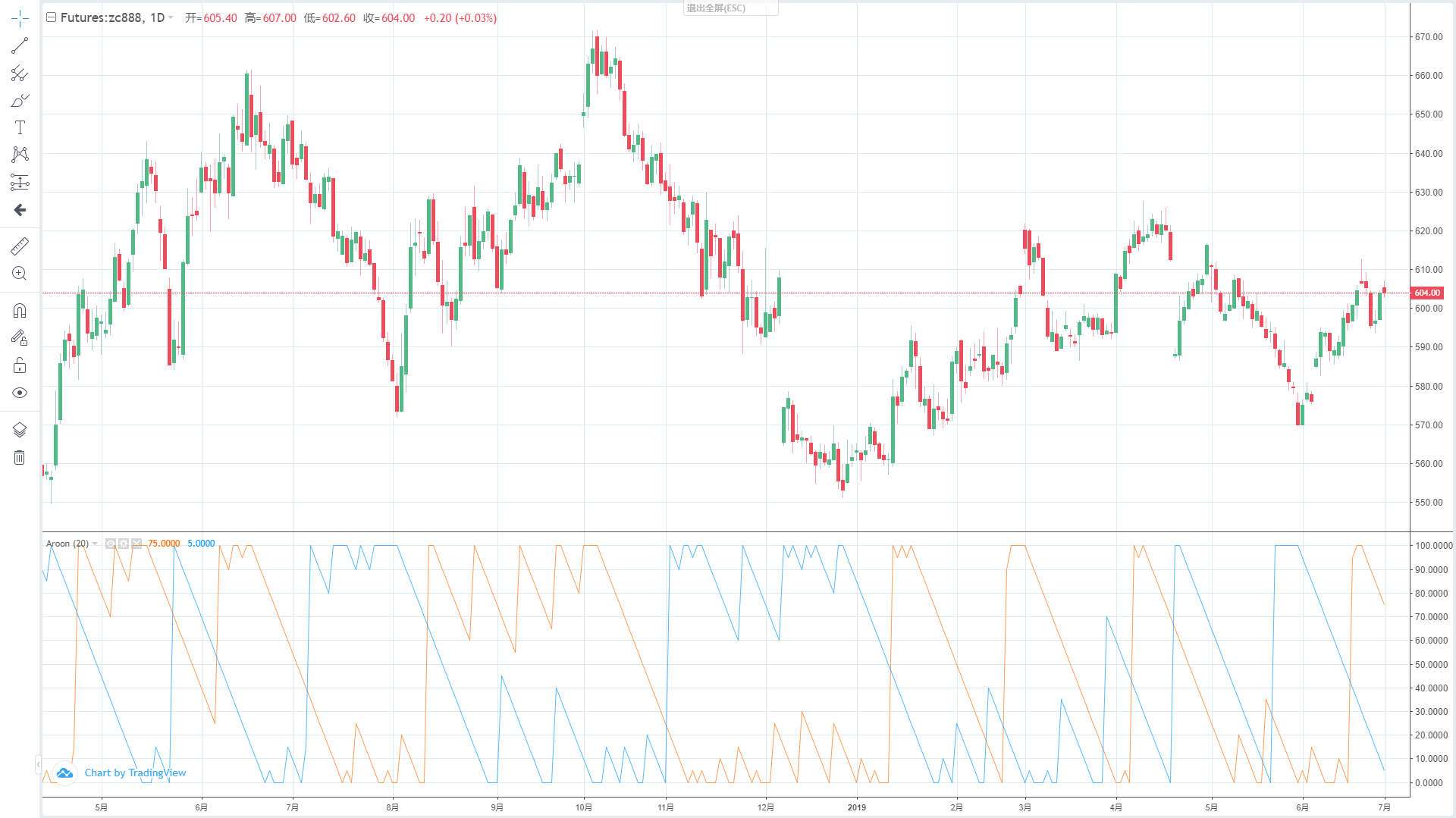 The Aroon indicator requires that you first set a time period parameter, just like setting the average period parameter. In traditional trading software, the number of cycles is 14. In addition, this period parameter is not fixed. You can also set it to 10 or 50 and so on. For the sake of easy understanding, let’s define it as: N. After determining N, we can calculate AroonUp and AroonDown.

The specific formula is as follows:

From this formula, we can roughly see the idea of ​​the Aroon indicator. That is: how many cycles there are, and the price is below the recent high/low, helping to predict whether the current trend will continue and measuring the strength of the current trend. If we classify this indicator, it is obvious that it belongs to the trend tracking type. But unlike other trend-tracking metrics, it pays more attention to time than price.

How to use the Aroon indicator

At the same time, we can also set a few fixed values ​​to accurately find the trading opportunity. We know that the Aroon indicator has been running up and down between 0 and 100. So when the market is on the rise, that is, when AroonUp is above AroonDown, when AroonUp is greater than 50, the market’s rising trend has already formed, and the price may continue in the future. when AroonUp under 50, the momentum for price increases is waning, and prices may fluctuate and fall in the future.

On the contrary, when the market is in a downward trend, that is, when AroonDown is above AroonUp, when AroonDown is greater than 50, the market downtrend has already formed, and the price may continue to fall in the future; when AroonDown wears down 50, the driving force for price decline is weakening. Future prices may fluctuate and rise. Then according to the above two paragraphs, we can list the terms of buying and selling as:

Build a trading strategy based on the Aroon indicator

After clarifying the trading logic, we can implement it with code. In this article, we continue to use the JavaScript language, and the trading variety is still commodity futures. reader with strong programming skills can also translate it into Python, or cryptocurrency.

Following by these steps : fmz.com > Login > Dashboard > Strategy Library > New Strategy, start writing the strategy, pay attention to the comments in the code below.

Note that Be sure to click on the following: Commodity Futures Trading Library. If you are adapted it to cryptocurrency, click on: Digital currency spot trading library.

Step 2: Get the data

In order to get closer to the real trading environment, we used the 2 pips of slippage and 2 times of the transaction fee to test the pressure during the backtest. The test environment is as follows: 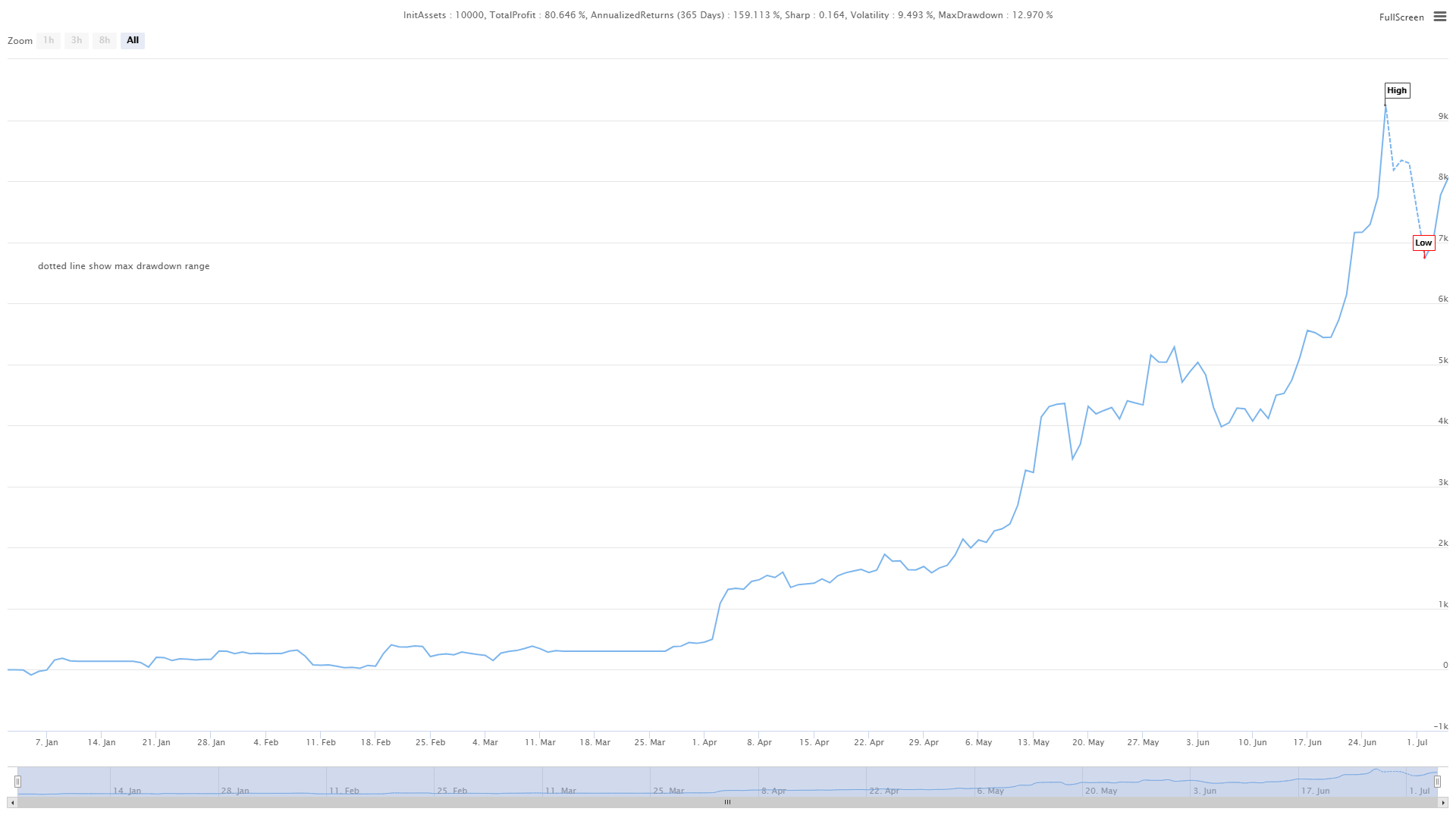 From the above backtest results, the strategy is very good when the market trend is smooth, whether in the rise or fall, the Aroon indicator can completely track the market. The capital curve also showed an overall upward trend, and there was no significant retracement. However, in the volatile market, especially in the continuous shock market, there was a partial retracement.

The advantages and disadvantages of the Aroon indicator

For the source code,

In this strategy, we fixed some parameters, such as: aroonUp or aroonDown is greater than and less than 50, causing the lagging issue of the strategy. In many cases, the market will rise or fall for a period of time before closing the position. Although this improved the winning rate and reduced the maximum retracement rate, it also missed a lot of profits, which also confirmed the truth of the homonym of profit and loss. Interested friends can dig it deeper and improve it.