5.3 How to read the strategy backtest performance report

Elements of a Strategy Performance Report 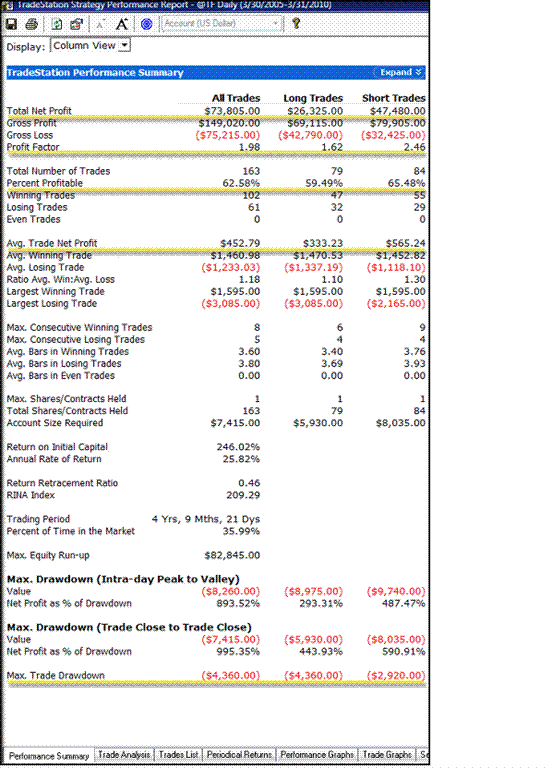 Figure 1 - The “front page” of a strategy performance report is the performance summary. The key metrics identified in this article appear underlined.

In addition to the performance summary seen in Figure 1, strategy performance reports may also include trade lists, periodical returns, and performance graphs. The trade list provides an account of each trade that was taken, including information such as the type of trade (long or short), the date and time, price, net profit, cumulative profit, and percent profit. The trade list allows traders to see exactly what happened during each trade.

Viewing the periodical returns for a system allows traders to see performance broken down into daily, weekly, monthly, or annual segments. This section is helpful in determining profits or losses for a specific time period. Traders can quickly assess how a system is performing on a daily, weekly, monthly, or annual basis. It is important to remember that in trading, it is the cumulative profits (or losses) that matter. Looking at one trading day or one trading week is not as significant as looking at the monthly and yearly data.

A strategy performance report may contain a tremendous amount of information regarding a trading system’s performance. While all of the statistics are important, it’s helpful to narrow the initial scope to five key performance metrics:

The total net profit represents the bottom line for a trading system over a specified period of time. This metric is calculated by subtracting the gross loss of all losing trades (including commissions) from the gross profit of all winning trades. The formula would be:

So, in Figure 1, the total net profit is calculated as:

While many traders use total net profit as the primary means to measure trading performance, the metric alone can be deceptive. By itself, this metric cannot determine if a trading system is performing efficiently, nor can it normalize the results of a trading system based on the amount of risk that is sustained. While certainly a valuable metric, total net profit should be viewed in concert with other performance metrics.

The profit factor is defined as the gross profit divided by the gross loss (including commissions) for the entire trading period. This performance metric relates the amount of profit per unit of risk, with values greater than one indicating a profitable system. As an example, the strategy performance report shown in Figure 1 indicates the tested trading system has a profit factor of 1.98. This is calculated by dividing the gross profit by the gross loss:

This is a reasonable profit factor and signifies that this particular system produces a profit. We all know that not every trade will be a winner and that we will have to sustain losses. The profit factor metric helps traders analyze the degree to which wins are greater than losses.

The above equation shows the same gross profit as the first equation but substitutes a hypothetical value for the gross loss. In this case, the gross loss is greater than the gross profit, resulting in a profit factor that is less than one. This would be a losing system.

The percent profitable metric is also known as the probability of winning. This metric is calculated by dividing the number of winning trades by the total number of trades for a specified period. As an equation:

In the example shown in Figure 1, the percent profitable would be:

The ideal value for the percent profitable metric will vary depending on the trader’s style. Traders who typically go for larger moves, with greater profits, only require a low percent profitable value to maintain a winning system, because the trades that do win—that are profitable, that is—are usually quite large. This typically happens with the strategy known as trend trading. Those that follow this approach often find that as few as 40% of trades might make money and still produce a very profitable system because the trades that do win follow the trend and typically achieve large gains. The trades that do not win are usually closed for a small loss.

Intraday traders, and particularly scalpers, who look to gain a small amount on any one trade while risking a similar amount will require a higher percent profitable metric to create a winning system. This is due to the fact that the winning trades tend to be close in value to the losing trades; in order to “get ahead” there needs to be a significantly higher percent profitable. In other words, more trades need to be winners, since each win is relatively small.

In our example from Figure 1, the average trade net profit would be:

In other words, over time we could expect that each trade generated by this system will average $452.79. This takes into consideration both winning and losing trades since it is based on the total net profit.

This number can be skewed by an outlier, a single trade that creates a profit (or loss) many times greater than a typical trade. An outlier can create unrealistic results by overinflating the average trade net profit. One outlier can make a system appear significantly more (or less) profitable than it is statistically. The outlier can be removed to allow for more precise evaluation. If the success of the trading system in backtesting depends on an outlier, the system needs to be further refined.

The maximum drawdown metric refers to the “worst case scenario” for a trading period. It measures the greatest distance, or loss, from a previous equity peak. This metric can help measure the amount of risk incurred by a system and determine if a system is practical, based on account size. If the largest amount of money that a trader is willing to risk is less than the maximum drawdown, the trading system is not suitable for the trader. A different system, with a smaller maximum drawdown, should be developed.

This metric is important because it is a reality check for traders. Just about any trader could make a million dollars—if they could risk 10 million. The maximum drawdown metric needs to be in line with the trader’s risk tolerance and trading account size.

Strategy performance reports, whether applied to historical or live trading results, can provide a powerful tool for assisting traders in evaluating their trading systems. While it is easy to pay attention to just the bottom line or total net profit (we all want to know how much money we’re making), considering additional performance metrics can provide a more comprehensive view of a system’s efficacy—and its ability to achieve our trading goals.