Many friends asked me to write a grid and market maker strategy,But I generally decline directly. Regarding these strategies, first of all, you must have a strong mathematical knowledge, at least a doctor of mathematics.

In addition, high-frequency quantitative trading is more about financial resources, such as the amount of funds and broadband network speed. The most important thing is that these violate my understanding of the trading.

Is there any other way to do high-frequency trading? Today we will introduce this RSI mean regression strategy based on Larry Connors.

When RSI2 falls below 10, it is considered over-selling and traders should look for buying opportunities.

When RSI2 rises above 90, it is considered over-buying and traders should look for selling opportunities.

This is a fairly aggressive short-term strategy aimed at participating in continuing trends. It is not intended to identify the main top or bottom of the price.

There are four steps to this strategy.

Use the long-term moving average to determine the main trends

Select the RSI range to determine buying or selling opportunities

Connors advocates the “close” method. Waiting for the closing price to open positions gives the trader more flexibility and can increase the winning rate.

Where should stop-loss be?

Connors does not advocate the use of stop loss. In a quantitative test of hundreds of thousands of transactions, Connors found that the use of stop-loss actually “damaged” performance.

Obviously, this is a short-term trading strategy that can exit quickly, or consider setting up trailing stop loss or adopting SAR synthetic stop loss strategy.

Sometimes the market does indeed price drift upwards. Failure to use stop loss may result in excess losses and large losses.

This requires traders to consider and decide.

When the DIA is higher than the 200-day SMA and the RSI (2) falls to 5 or lower, a bullish signal appears.

Among the 4 bullish signals, DIA rose by 3 of 4 times, which means that these signals may be profitable.

Among the four bearish signals, DIA fell only once.

After a bearish signal in October, DIA broke the 200-day moving average.

Once the 200-day moving average is exceeded, RSI2 will not fall to 5 or lower to generate another buying signal.

As for profit and loss, it will depend on the level of stop-loss and take- profit. 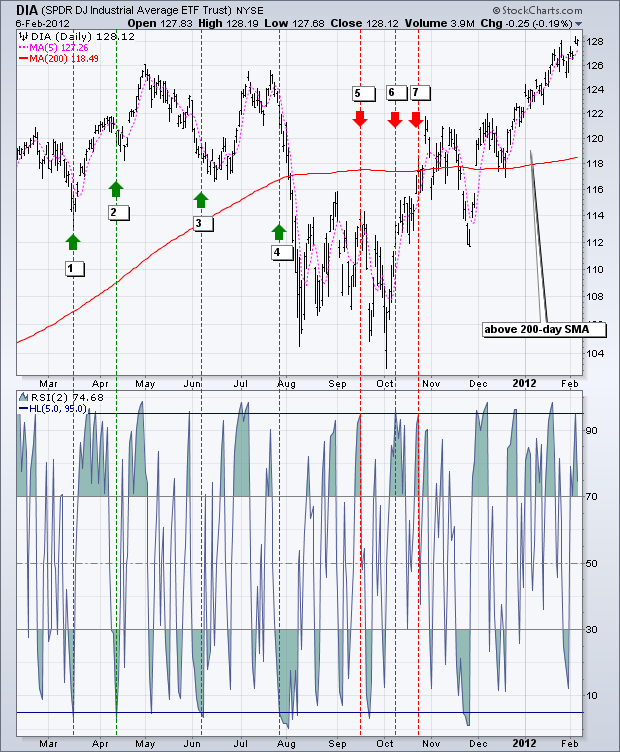 The second example shows Apple (APL), which is above the 200-day moving average for most of the time period.

During this period, there are at least ten buying signals.

Since APL saw a sawtooth decline from late February to mid-June 2011, it is difficult to avoid the loss of the first five indicators.

As the APL rose in a jagged pattern from August to January, the last five signals performed much better.

As can be seen from the chart, many signals are very early.

In other words, Apple fell to a new low after the initial buy signal and then rebounded. 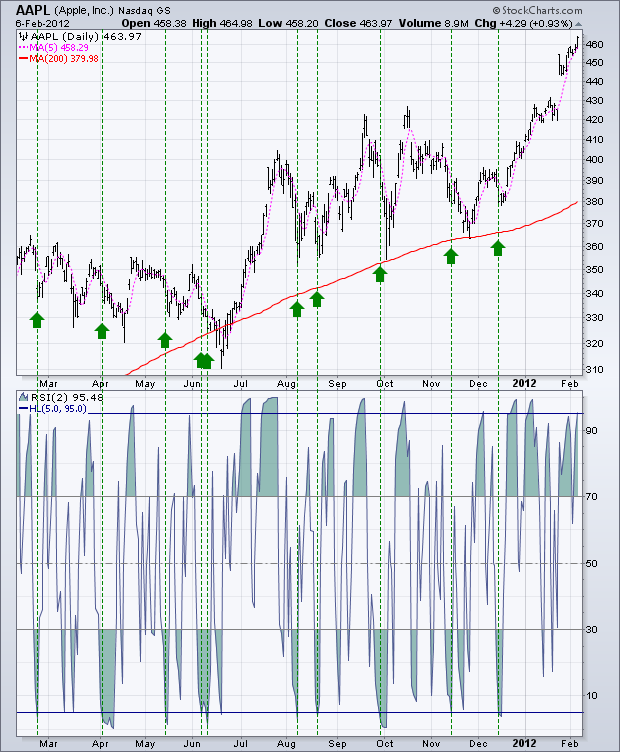 The RSI2 strategy provides traders with the opportunity to participate in continuing trends.

Connors pointed out that traders should buying at price retracement point, not breakouts point.

This strategy is in line with his philosophy.

Even though Connors’ tests indicate that stop loss affects performance, it is prudent for traders to develop exit and stop loss strategies for any trading system.

When the situation becomes over-buying or a stop loss is set, the trader can exit the long position.

Similarly, when conditions are oversold, traders can withdraw from short positions.

Use these ideas to enhance your trading style, risk-reward preferences and personal judgment.

Connors’ strategy is relatively simple, it is simply written in M language. (Everyone can understand)

Because the original strategy design target was US stocks, the 200-day moving average was used as a reference.

In the violently volatile digital currency market, it is just suitable for short-term value return.

So we adjusted the time range to 15 minutes, and the MA period was 70, and use 1 times the leverage for backtest.

After a systematic backtest, we see that the overall winning rate of the RSI strategy is high. Its performance satisfied us.

The maximum retracement occurs at 312, and extreme market conditions will do more harm to the strategy of shock return.

After RSI2 rise above 95, the market can continue to rise and it is dangerous to establish a short position.

Traders may consider filtering this signal by waiting for RSI2 to return below its centerline 50.